Basic Telepathy, also able to distort radio frequencies. She was capable of doing something which Sabretooth referred to as 'the glow', where she would enter his mind astrally and sort his bad memories to the back of his head, making him more lucid and peacible.

Able to operate a number of firearms, most of which were bigger than her. 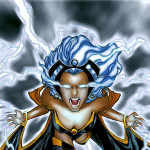