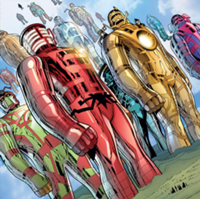 "When the first of us appears to you, faithful one, look well upon his visage — and know the meaning of our mission!"
―Celestial

The Celestials are a race of extremely-powerful cosmic beings that hail from an unknown planet or star system in the universe. They are the ones responsible for the creation of Homo Superior, the Deviants and the Eternals.

The Celestials are known to have a vast array of cosmic powers and abilities at their disposal. Such powers allow them to be far superior to those of gods and withstand planet-shattering explosions.