David Nakayama is artist that has illustrated X-Men characters for Marvel Comics.

For reasons unknown, Nakayama was selected to create DVD covers for the 1992 animated series in 2009, rather than getting Larry Houston, who defined the look of the series. Nakayama's work was drawn in a more angular style, instead of emulating Houston's work. The Nakayama key art continues to be used by Disney to this day. David Nakayama has also contributed numerous X-Men '92 comic covers while Houston has never been given the opportunity. 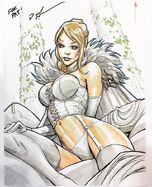