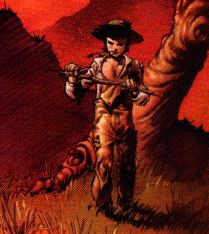 Dog Logan is the son of Thomas Logan. While Thomas was working at the Howlett's Mansion, Dog was sent to play with James. Soon Rose was invited to join tem because she had no family to raise her. The three of them played together at the mansion. Thomas was an abusive drunk who beat Dog. He often talked of how the Howletts thought they were better and how he'd show them. The violence towards Dog eventually warped his mind and made him act innapropriatetly towards Rose. Rose did not return the sentiment and he thrust himself upon her. James caught them in the garden and ran to get his father. Rose slapped Dog and ran away.

James's Father, John, is later seen talking to Thomas and is telling him to control is son. After James ratted him out, Dog got angry. He found james walking in the rain with his puppy and he attacks James saying, "Shut the hell up you little turd! I'll kill you!" He is at James's neck when the puppy, Callie, bites his leg. Dog slits the Dog's throat with a knife, to James's horror. John Howlett throws the Logans off the property.

Thomas comes home, angry, to see Dog hiding in the corner. Dog thinks that Thomas will hurt him and screams his complaints. Thomas said that it is not his fault. It is soft john and his soft son. They don't deserve their place in life and the Logans are going to fix that.

James screams and runs towards his father.Dog tries to shoot James but Rose stops him. James hits dog in the face. James attacks Thomas and Elizabeth tells him not to hurt James but he knocks James away. Thomas then finds that he is bleeding and dies almost instantly, to the horror of the onlookers, Rose and Elizabeth.

During this time, Dog was on the ground with his face bleeding from James's claws. James has become an animal and begs his mom to help. Elizabeth say, "Oh Lord...oh, please. Not him too." James approaches her but she slaps him and tells him to get away. Rose leaves after him. Dog come back to reality and his face still bleeds profusely, but we see three deep cuts across his face. He is alone in the room with Elizabeth. He says that he didn't mean to do any harm or anything and he asked if she was going to hurt him. She holds Thomas's gun up to her head and says, "It's not going to hurt." She then presumably blows her brains out.

Later, John Howlett Sr. (James's grandfather) interrogates Dog. He asked what happened and threatened him when he didn't tell. Then Dog said, "It was Rose, sir...She had a gun." Rose and James are marked criminals and they escape to a mining camp in British Columbia. Rose then changes James's name to Logan.

Years later, John Howlett Sr. on his deathbed called for Dog and said that he wanted to make peace with James(Logan) and Rose. He tells Dog to find them. Dog says, "I promise, sir, I'll hunt him to the ends of the earth...like a dog."(shown in picture to the right)

Dog begins to track down Logan and Rose. He asks a fur trader where he was. The man says that he doesn't know anyone named Howlett, but there is a boy that fits the description two miles south at the quarry and he came a few years back with a redhead. Dog says thanks, then snaps the man's neck.

There is a cage match where Logan, Rose, and Smitty are living and Rose is going to marry Smitty. They need the money so Smitty signs up to fight. He talks with a cloaked Dog in the bar and tells him about Rose and Logan, which means that Dog has found them. Logan is angry at Rose and Smitty bacause he loves Rose and thought they'd be together. Logan signs up to fight in the cage match. Winner gets $200. Rose doesn't want Smitty to fight, especially not against Logan. Smitty thinks its because he'll hurt the "boy" and assures her that he won't, but Rose knows Logan's dark side and thinks Smitty will get hurt. Smitty is insulted and walks away.

The fighting starts. Logan takes the name "Logan the Wolverine". Dog watches in the background. When it is time for Cookie the Cook to fight Logan the Wolverine, Dog comes up to Cookie and gives Cookie brass knuckles to "ensure that his investment wins".

The fight starts and Cookie hits Logan with the brass knuckles for humiliating him. Logan fights back viciously. Cookie says something rude about himself and Rose and Logan goes into a rage, attacking Cookie, violently without mercy. Cookie is on the ground and Logan's claws are on the verge of popping out, but they don't. Cookie says, weakly, "Don't kill me." Wolverine restrains himself and doesn't.

This is the final round, Logan v.s. Smitty, Winner gets the money, loser buys the drinks. The crowd cheers Logan on. The fight starts well but Logan clearly has the upper hand. Logan and Smitty argue about Rose. Smitty says that he knows that Logan is not Rose's cousin and that if Logan really loves her he should do the right thing. Smitty says he doesn't want to hurt Logan, but Logan says, "Well, that's just too bad." as he slams Smitty against the fence. Logan grabs Smitty and says. "Hit me." seeing Smitty's confusion, Logan says, "Just hit me, you idiot. and make it look good." Smitty its Logan hard and Logan goes flying and hits the ground. He pretends to be knocked out. The announcer says, "An' the winnah by knockout...SMITTY!" The crowd is shocked.

Afterwards, Logan talks to Smitty to make sure that he will take care of Rose, or else. Smitty has made, Logan the new foreman of the camp. Just as Smitty leaves, Dog comes out running and yells, "Hey! Howlett! James Howlett! You stole my name!"

He begins to attack Logan, who is in a bewildered state. Dog says,"What's the matter Jamey-Boy.. forget where you came from?" He slams Logan into a wooden building and it shows him uncloaked. With a wild look in his eye, he says to Logan, "I guess that means you forgot your old pal, Dog...Well, I sure as Hell remember you." (shown in picture to the left).

Dog approaches Logan and says that James probably thought he could get away couldn't he, etc. Logan replies, i don't know James, you must be mistaken, bub. Dog says that he is lying and hits him with a pitchfork. Smitty goes to Rose and tells her about Logan taking a dive in the competition and she gets worried about logan being left alone and runs away to him.

A crowd gathers around Logan and Dog. Dog tries to jog Logan's memory by talking about Callie, Logan's dog, and how he delighted in killing her and how "Logan" wept like a girl. He taunts him by saying that he was always a weakling and that he drove his mother insane. Logan says, "My Mom...? But I don't...I mean... Oh, Lord." His past seemed to come back to him, much to Dog's delight. Dog continues to taunt him about how she blew her brains out. He badmouthed Rose and said he was too busy running away with Rose to be there when his mother died.

Dog finally goes too far and with is memories restored, Logan begins to attack with full force. Logan says, "You killed my father, you monster.. I remember now. All these years, I thought it was me." Rose is screaming for Logan to stop. Smitty is screaming for Rose and that's when Logan snikts his claws.The crowd watches in horror, Rose screams and runs towards Logan. She impales herself on his claws. Rose dies. Logan goes into a state of shock and escapes to is only refuge, the woods.

Retrieved from "https://x-men.fandom.com/wiki/Dog_Logan?oldid=25764"
Community content is available under CC-BY-SA unless otherwise noted.