Longshot is an artificially created humanoid lifeform, with the ability to defy probability. He is from an alternate dimension known as "Mojoworld" or the "Mojoverse". He is one of many slaves created by genetic engineers in the employ of Mojoworld's masters, the grossly obese, virtually immobile Spineless Ones, who are ruled by the media-obsessed delusional maniac named Mojo. The head geneticist, Arize, gave Longshot and his other creations (such as the ram-headed Quark) free will and a conscience, hoping that one day they would rise up against their masters. Longshot and many of his fellow slaves rebel against the slave-masters. They undergo a mystical ritual that gives them the power to create good luck for themselves. Despite this power, their masters win the war due to their superior weaponry and the limits of the slaves' luck. Longshot is rendered amnesiac by the Spineless Ones, but he manages to flee from Mojoworld to Earth. A number of Mojo's servants, led by the hound-like Gog and Magog, pursue him, but get stuck between Longshot's world and Earth. Unable to remember his real name, Longshot becomes an adventurer and takes the name "Longshot" after several humans call him that due to his incredible good luck. While recovering, Longshot befriends the human stunt-woman named Ricochet Rita and works as a movie stuntman himself. He also adopts the docile Magog, who he renames "Pup". Finally, Mojo and his assistant, the six-armed sword-wielding assassin named Spiral, follow Longshot to Earth. Longshot battles Spiral, and defeats Mojo with the aid of Ricochet Rita, Quark, and Doctor Strange, who then send Mojo and his minions back to the Mojoverse. Longshot, Quark and Rita return to the Mojoverse to free the other slaves. A once-again amnesiac Longshot is sent back to Earth by Mojo, where he joins the X-Men. With the X-Men, he battles the Juggernaut and the Marauders. Longshot dies while defeating the Adversary, but is then restored to life by Roma. Longshot and the X-Men fight the Reavers in Australia for the first time. He battles the Brood. With the X-Men, he next invades Genosha. He soon becomes Dazzler's lover. However, he suffers a severe identity crisis, and eventually leaves the X-Men. Before long, Longshot is reunited with Dazzler, and is teleported with her to Mojoworld. For a short time, they live in Mojoworld, until they are captured by Mojo. They, with the X-Men and Mojo's temporary successor, "Mojo II: The Sequel", lead a revolt against Mojo. Longshot and Dazzler also learn that Dazzler is pregnant with their child, who is hinted to be Shatterstar. The pair also care for the X-Babies, a group of Mojo-manufactured child clones of the X-Men. One of the many X-Babies created is a young version of Longshot himself. Dazzler's pregnancy has not been mentioned since; the child may have been born and never seen by the readers, although evidence suggests that Dazzler may have had a miscarriage, though it has not been established officially what became of the infant. Both Longshot and Dazzler have since returned to Earth separately from one another with Dazzler believing that Longshot has been killed.

After being "killed" by the Thingy and denied entrance into Heaven, Longshot realizes he has lost his innocence, the main source of his luck power. Ejected from Heaven and Mojoverse, Longshot finds himself stranded between Baum and Barrie, Kansas, pursued by the vengeful Thingy. When a child who has befriended the broken hero is damaged by the monster, Longshot, helped by a group of mental patients, rediscovers his faith in himself and his own purity despite the suffering of his life to restore her to health. In the end, the unlikely group sets out for the big city, searching for adventure, secure in their luck and their innocence.

Longshot is recruited for the Exiles by Heather Hudson to help against Proteus. Mojo claims that he and all the other inhabitants of Mojoworld are "unique" in that there is no parallel counterpart to his realm. This would extend to Longshot, though what impact this will have on his membership in the Exiles is unknown. Morph reveals that Longshot's abilities cancel Proteus' reality warping powers, making him a perfect candidate for the team. He is brought aboard to replace the dead Mimic. Longshot saves Blink from Proteus in 2099, and saves Blink, Morph, Sabretooth, Star Brand, Lenore Fenzl, and Nightmask from Proteus in the New Universe Approximation. When the Exiles visit Future Imperfect, Longshot tries to stop Maestro's rampage and stop Proteus from taking over Maestro's body. The Exiles finally corner Proteus at the Heroes Reborn world, and trap Proteus in Morph's body. With the hunt for Proteus at an end, Longshot remains an Exile to continue fixing damaged realities. During their last mission, Longshot is seemingly brainwashed into attacking Blink by Madame Hydra and the Hand. Afterwards, Longshot leaves the Exiles to be with Dazzler.

Longshot meets up with Darwin some time after the events of Messiah CompleX and attempts to lead him to Professor X, due to the fact that Darwin wishes to help the Professor. During that time, Longshot states that his powers are failing him recently, and proceeds to test them and himself on some people, causing those people to turn on Darwin. After Darwin escapes, the crowd attack Longshot, but he manages to mysteriously get away. He reappears in an alleyway, unaware he is being tracked by Jazinda. He then reveals himself to be a Skrull named Nogor and goes to meet up with Darwin as they move through Detroit. Later, they are attacked by Jazinda and She-Hulk. Darwin "evolves" to the point where he recognized Nogor as a Skrull and defeated him. Nogor was later taken into custody by She-Hulk and Jazinda. The real Longshot's location during this time is not disclosed.

The real Longshot shows up in Detroit after reading an article about his appearance there during the events of Secret Invasion. After a small fight with Guido, he helps X-Factor find out what happened to Darwin and his father, leading them to the Karma Project. During that time, he is seen commenting that women are too friendly towards him, and reveals that his memory loss, and the subsequent changes in his personality, is the main reason behind why he and Dazzler are no longer an item.

In Nation X: X-Factor #1, X-Factor lands on Utopia. While Longshot rekindles his romance with Dazzler, the rest of X-Factor is fighting off a new villain. When X-Factor leaves, they forget Longshot, who is still on Utopia.

Known Powers: He was genetically engineered and augmented by magical means to have certain superhuman abilities.

Superhuman Agility: possesses the equivalent musculature of a human male, but is much lighter due to having hollow bones.

Superhuman Attractiveness: some degree of supernatural attractiveness which tends to compel women to fall in love with him upon first sight.

Psychometric Insight: can also telepathically "read" the recent memories of a person by making physical contact with him or her.

Psychometry: can read "psychic imprints" that people leave on objects that they have handled and sometimes can even look into the future of the person or object he touches.

Probability Field Manipulation: The mystical augmentation gave him the ability to affect probability fields through psionic means in order to give himself "good luck" in his activities. This allows incredibly unlikely events to happen in Longshot's favor. This ability is tied into the positive aspects of his personality: should he attempt to use his powers for a selfish or evil act, or should he give up hope, his powers will fail to function or even backfire, giving him bad luck.

He has a star shaped scar on his left eye from being branded. The scar is only visible (glowing brightly) when Longshot uses his powers. 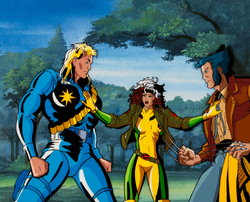 Longshot carries blades which he hurls with inhuman accuracy. Initially and most often depicted as skien style shuriken (straight edged blades with a trailing balance pinion), some artists have depicted the blades as much larger, and a recent Exiles artist has depicted them more akin to tapering spikes more resembling bo-shuriken. His throwing blades have always been carried in a bandoleer which artists have never been consistent in depicting. The lowest number of pouches in the bandoleer has been seen to be 33 exactly, but the bandoleer has also been seen with upwards of 60 pouches and the more common depictions seem to be somewhere in the 40's. During his original incarnation, until his return to the X-Men in the early 90's, Longshot carried a long dagger in a sheath strapped to his right thigh, and a small knife in a sheath on his right boot. Longshot has always carried a shoulder bag and large belt pouches, in which he has kept many collected objects that have caught his fancy. Originally, his belt held three pouches (two on the right, one on the left side where he normally wears his shoulder bag), though four pouches were much more regularly depicted thereafter. Small pouches were seen on his boot until the early 90s, but disappeared along with his dagger and knife. A larger pouch strapped to his right thigh has been depicted in all appearances of Longshot since the dagger ceased to be used. During his X-Men years, Longshot also carried a folding grappling hook and rope either carried looped around one shoulder or stored in his shoulder bag, and a set of throwing spikes which produced net-like wires between them to restrain a target.