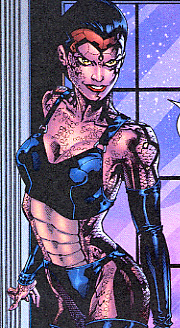 Miranda Leevald, otherwise known as Stacy X, had the mutant ability to exude pheromones, which she could control to stimulate bodily sensations and functions, such as causing orgasms or vomiting. Her mutation also had a physical manifestation: at the age of sixteen Stacy's skin was replaced by patterned, snake-like scales. At one point her skin was shown shedding, much like a real snake's.

She first appeared as a member of the Nevada mutant brothel, the X-Ranch. After the hate group the Church of Humanity destroyed the ranch, Stacy joined the X-Men. Forthright and argumentative, Stacy did not take easily to teamwork and left the team shortly after joining. She did play a vital role in fighting Black Tom, using her powers to seduce him and releasing the other trapped X-Men, allowing them to defeat him. She also proved to be a highly skilled fighter, even giving Wolverine a proper workout. Where she got this training is unknown, much like everything else about her past.

Soon after being rescued by the X-Men from the X-Ranch, Stacy stayed at the Institute, but took some time off after "servicing" a special client in Chappaqua, NY. Wolverine tracked her down and fought with her, but soon the two came to an understanding. Whether Wolverine convinced Stacy to completely abandon her former profession is unknown, but Logan did talk Kurt out of whatever censure he was contemplating. It was known that Stacy continued to "work" for special clients even as she operated as a member of the X-Men. Furthermore, during her membership with the X-Men she tried to seduce members Archangel and Nightcrawler.

She became a team member who was highly depended upon. At one point when Chamber and Nightcrawler were stranded in the mountains, Chamber telepathically communicated with Stacy X. While she brought help she was upset that Chamber invaded her mind without permission until Chamber told her she was the only one he thought would believe him as his telepathic powers were still new.

At one point, Miranda works with a food magnate, who is very sick. He reveals himself as a mutant, but with debilitating mutations: advanced aging, making him old before his time, and an immunity to all painkillers. She changes his body chemistry so that he will live out the rest of his short life without pain.

After a spat with Husk caused by the fact that they both were in love with Archangel, she decided to leave the mansion. (She knew about Paige's love as she could see her lust with her ability to see people's emotions through their pheromones). However, she left behind for Warren a video of herself jumping rope naked, stating that she didn't want to stay around them and taunting him that he missed the chance to have had someone as sexy as herself as a girlfriend, instead of Paige.

Due to the Scarlet Witch's magic, she is one of the many mutants to lose her powers after the events of Decimation. While she was a prostitute when she had her powers, she never actually slept with anyone for money, relying on her pheromone powers. Since she lost her powers, this has apparently changed.

She became a member of the reformed New Warriors under the codename Ripcord. The circumstances of how she joined aren't completely unknown, but her attitude and statements show that she wanted to change her life, and going back to being a hero seems like the path she chose best to do it. Besides being given artificial powers to replace what she lost, she apparently also has lost her leftover scaled skin. She was killed in an accident along with Skybolt.

Stacy X mysteriously appears again in 2011's Vengeance limited series, the official sequel to the 1989/1990 crossover "Acts of Vengeance". Stacy is shown having a three-way sexual encounter with Welsh popstar Sugar Kane (the X-Man Chamber's onetime girlfriend) and new character Ultimate Nullifier in a high-rise hotel room after they all hook up at a popular nightclub. The trio are then interrupted by the sudden arrival of Magneto, who seeks to discipline Stacy for what he considers to be her disgraceful decadence which is embarrassingly tarnishing the collective image of Earth's too few remaining mutants. Magneto proceeds to magnetically thrash the room and toss all of them around. However, Ultimate Nullifier engages in combat with Magneto while Stacy and Sugar Kane make their escape. Successfully subduing Magneto by depowering him with a power-dampening gun and beating him with formidable martial arts skills, Ultimate Nullifier then reveals to Magneto that he was actually secretly acting as a bodyguard to Stacy, and that it is his mission to protect her from Magneto.

Pheromone Control: she is sensitive to pheromone emissions, secretes her own pheromones upon skin-to-skin contact, allowing her to stimulate body functions in others to cause orgasms, vomiting, nausea, rectal malfunctions, etc. This power is seen to work much like Rogue's absorption power, as seen when Radius' forcefield annuled her pheromone control.

Snake like, scaly skin that gives her an unknown degree of durability. She is able to heal others by speeding up their healing process, and can increase their stamina so that they won't tire easily, giving her teammates rushes of adrenaline.

Retrieved from "https://x-men.fandom.com/wiki/Stacy_X?oldid=29827"
Community content is available under CC-BY-SA unless otherwise noted.