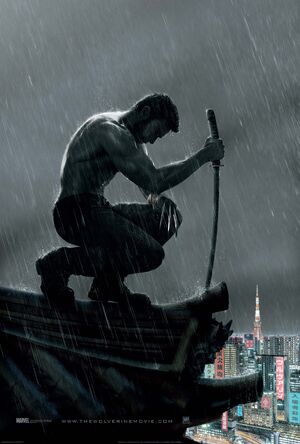 The Wolverine is a stand-alone movie that continues on X-Men: The Last Stand, showing the character (played again by Hugh Jackman) in Japan. The film was released on July 26, 2013.

In 1945, Logan, the Wolverine, is held in a Japanese POW camp near Nagasaki. During the atomic bombing of Nagasaki, Logan rescues an officer named Yashida and shields him from the blast. In the present day, Logan lives as a hermit in Yukon, tormented by hallucinations of Jean Grey, whom he was forced to kill (at the end of X-Men: The Last Stand). He is located by Yukio, a mutant with the precognitive ability to foresee people's deaths, on-behalf of Yashida, now the CEO of a technology corporation. Yashida, who is dying of cancer, wants Logan to accompany Yukio to Japan so that he may repay his life debt. In Tokyo, Logan meets Yashida's son, Shingen, and granddaughter, Mariko. There, Yashida offers to transfer Logan's healing abilities into his own body, thus saving Yashida's life and alleviating Logan of his immortality, which Logan views as a curse. Logan refuses and prepares to leave the following day. That night, Yashida's physician Dr. Green (aka Viper) introduces something into Logan's body, but Logan dismisses it as a dream. The next morning, Logan is informed that Yashida has died. At the funeral, Yakuza gangsters attempt to kidnap Mariko, but Logan fights off against the Yakuza, rescues Mariko and escape together into the urban sprawl of Tokyo. Logan is shot and his wounds do not heal as quickly as they should. After fighting off more Yakuza on a bullet train, Logan and Mariko hide in a local love hotel. Meanwhile, Yashida's bodyguard Harada meets with Dr. Green who, after demonstrating her mutant powers on him, demands he find Logan and Mariko. Logan and Mariko travel to Yashida's house in Nagasaki, and the two slowly fall for each other. Meanwhile, Yukio has a vision of Logan dying, and goes to warn him. Before Yukio arrives, Mariko is captured by Yakuza. After interrogating one of the kidnappers, Logan and Yukio confront Mariko's fiance, corrupt Minister of Justice Noburo Mori. Mori confesses that he conspired with Shingen to have Mariko killed because Yashida left control of the company to Mariko, and not Shingen. Mariko is brought before Shingen at Yashida's estate when ninjas led by Harada attack and whisk her away. Logan and Yukio arrive later and, using Yashida's X-ray machine, discover a robotic parasite attached to Logan's heart, suppressing his healing ability. Logan cuts himself open and extracts the device. During the operation, Shingen attacks but Yukio holds him off long enough for Logan to recover and kill him. Logan follows Mariko's trail to the village of Yashida's birth, where he is captured by Harada's ninjas. Logan is placed in a machine by Dr. Green, who reveals her plans to extract his healing factor and introduces him to the Silver Samurai, an electromechanical suit of Japanese armour with energized swords made of adamantium. Mariko escapes from Harada, who believes he is acting in Mariko's interests, and manages to free Logan from the machine. Harada sees the error of his ways and is killed by the Silver Samurai while helping Logan escape. Meanwhile, Yukio arrives and kills Dr. Green as Logan fights the Silver Samurai. The Silver Samurai severs Logan's adamantium claws and begins to extract Logan's healing abilities, revealing himself to be Yashida, who had faked his death. Yashida starts to regain his youth, but Mariko intervenes and stabs Yashida with Logan's severed claws while Logan regenerates his bone claws and finishes off Yashida. Logan collapses and has one final hallucination of Jean, in which he decides to finally let go of her. Mariko becomes CEO of the Yashida Corporation and bids farewell to Logan as he prepares to leave Japan. Yukio vows to stay by Logan's side as his bodyguard, and they depart to places unknown. In a mid-credits scene, Logan returns to the United States two years later and is approached at the airport by Magneto and Professor X who was thought to killed in X-Men: The Last Stand; they warn him of a grave new threat to the mutant race.

Hugh Jackman is a self-confessed fan of the Chris Claremont-Frank Miller "Wolverine" comic (1982), especially the Japanese saga. About the Japanese arc, Jackman stated that: “..there are so many areas of that Japanese story, I love the idea of this kind of anarchic character, the outsider, being in this world - I can see it aesthetically, too - full of honor and tradition and customs and someone who’s really anti-all of that, and trying to negotiate his way. The idea of the samurai, too - and the tradition there. It’s really great. In the comic book he gets his ass kicked by a couple of samurai - not even mutants. He’s shocked by that at first.”

Christopher McQuarrie, who went uncredited for his work on X-Men, was hired to write the screenplay for the Wolverine sequel in August 2009. Darren Aronofsky (The Wrestler, Black Swan) was announced as director of the film but had relinquished his position to spend time with his family. The film was further delayed by the 2011 earthquake in Japan.

James Mangold was hired as the director in June 2011 and filming started in July 2012. 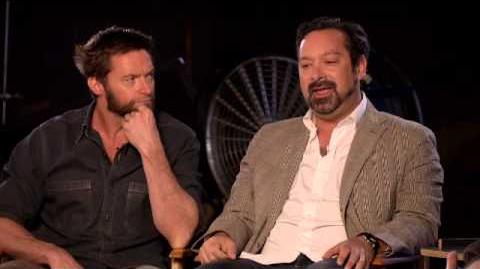 In a Japanese casino

Yukio on a motorcycle