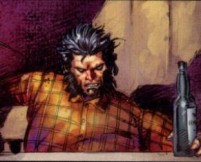 Thomas Logan is the father of Dog Logan and the lover of Elizabeth Hudson. After his son killed James' puppy, Thomas Logan was fired from his job as grounds-keeper for the Howlett Estate. He wouldn't stand for it so he went with Dog, that night, to the Howlett Estate. He tried to get Elizabeth (James' Mother) to leave with him. John Howlett (James's Father) came into the room and Thomas Logan shot him. Seeing this as he walked in, James freaked and tried to attack Thomas. Thomas Logan knocked him away, but it was then revealed that James had injured him with claws that suddenly protruded from his hand. Logan falls to the floor, dead. Elizabeth Howlett calls James a monster and yells at him to leave the mansion, she then takes Tom's gun and shoots herself.

Later, Logan meets Thomas Logan in Hell. Thomas tells him that he had been waiting for this moment. Logan denied that he was his father and said that Thomas killed his only father. Thomas replies, "That man was raising you to be a soft and pampered little turd, but that ain't who are you, is it. You showed me that. Hell, you showed the whole world." He said since Logan killed him he has waited for his revenge, butt hearing the stories from all the people Logan killed and sent to Hell, he couldn't be more proud. He said, "You're a Logan through and through."

After Logan attained the soulcutter, Thomas said, "You've done it boy. Hell is yours....Ours. Now we'll rule them all...Together." Logan responded by throwing the soulcutter into a crowd of demons, much to Thomas's anger and dismay. Thomas denounces him as a son, Logan then says "darn right" and cuts Thomas's face with his broken claws as he leaves with Puck .

Retrieved from "https://x-men.fandom.com/wiki/Thomas_Logan?oldid=23872"
Community content is available under CC-BY-SA unless otherwise noted.