Wolverine and the X-Men

Wolverine and the X-Men was the fourth animated incarnation of the X-Men, following the failed TV pilot, Pryde of the X-Men, the 90s X-Men and X-Men: Evolution. The new series premiered in America on January 23rd, on Nicktoons Network. Though a second season was originally planned, Joe Quesada, Arune Singh, and Josh Fine said the the show was cancelled after they were unable to work out a financing with their financing partner.

After the mansion explodes, Professor Charles Xavier and Jean Grey go missing, and the X-Men disband. 1 year later, Wolverine attempts to reform the X-Men, and succeeds with Beast as his first recruit. They later recruit Iceman, Shadowcat, Forge and Storm but fail with Rouge (who can't trust Logan to stay in one place for long), Nightcrawler (who is busy helping mutants wishing to leave for Genosha), Colossus (who didn't want to leave his family again), and at first, Cyclops (who was in a deep depression from Jean's vanishing). With financial backing from Angel, the Xavier School for Gifted Youngsters is rebuilt, but remains empty of students. Emma Frost joins the team, taking the place of Jean as the team telepath; she uses Cerebro to pinpoint Professor X's location at Genosha, where Magneto has been caring for his comatose friend.

Taking the Professor back to the mansion, they are greeted by a telepathic message from him from 20 years in the future; Charles will not awaken for two decades, but he can use his body in the present as a medium to relay news of the future to his X-Men. He explains the future is nightmare; robots known as Sentenials have taken over the world, turning the humans into cyborgs and capturing mutants to replicate their powers to evolve. The X-Men work to prevent this nightmarish future, fighting off the MRDs, the Brotherhood and other enemies.

Rouge joins the Brotherhood to gain information for the X-Men, even befriending Domino. She works with them, but her higher morals often cause friction between her and the group; at these points, Domino would intervene. During one of Quicksilver's plans, the Brotherhood nearly destroyed Genosha by not carefully examining Nitro's powers, forcing the X-Men to begrudgingly had Nitro over to the MRDs for public safety.

Jean is later found to have ended up comatose like the Professor, but awakens with amnesia. Threatened by the MRDs after her nurse discovered she was a mutant, Jean causes a psychic blast that knocks out the entire city. This lead to a fight with Mr. Sinister's band, while the X-Men where able to rescue her and restore her memory. Emma is then revealed to have worked for the Inner Circle, a group after the Phoenix force, which emerges for the most powerful telepaths every point in history where a great disaster has taken place. Realizing her group seeks malevolent goals, Emma sides with the X-Men.

In the future, it's revealed only Wolverine survived the disaster and has been fighting against the leader of the Sentenials - Master Mold. He could have prevented the current future if he had trusted Emma; Professor X attempts telling Logan's past self, but barely gets the message through. When the extracted Phoenix force attempts to repossess Jean, Emma absorbs it and turns into her diamond form to prevent it from leaving. The result is her exploding into shards of diamond and the future becoming altered.

Professor X congradulates his X-Men in the past, but quickly informs them of the major changes that have now occured. Though Sentinals are no longer a problem, Apocalpse now rules the earth. 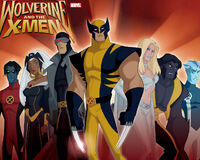