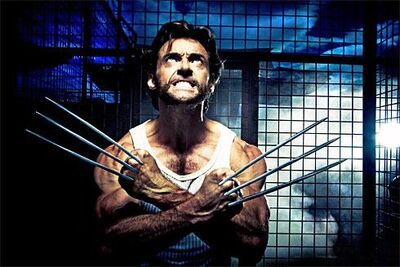 X-Men Origins: Wolverine is a film based on the fictional Marvel Comics character Wolverine, released on May 1, 2009. The film is directed by Gavin Hood and stars Hugh Jackman as the title character. It is a prequel to the X-Men film trilogy, focusing on the mutant Wolverine and Team X, before his skeleton was bonded with the indestructible metal adamantium. It is set twenty years before X-Men and will focus on Wolverine's violent past, and his early encounters with William Stryker. The Weapon X program and his interactions with other mutants will be explored, including his complex relationship with Sabretooth/Victor Creed. Also, as the Wolverine page says: it is not a sequel to X-Men: The Last Stand (2006), but a prequel. However, it is still part of the X-Men series and is the fourth movie.

NOTE: To see a summary and extra information of this movie, go to the Wolverine page.

Wolverine is a Spin-Off Movie which shows Logan's past - before he joined the X-Men. The film is mostly set in 1981 (20 years before the first X-Men film).

1845: It shows him and Sabretooth discovering they are half brothers, after an incident where he discovers his bone claws and they find out both their father had slept with Logan's mother.

1864 to 1975: Then it shows him and Sabretooth taking part in the American Civil War, World Wars I & II, and Vietnam, before they are recruited to William Stryker's special Team X.

1979 to 1985: But after a mission, Wolverine quits after he is disgusted with the team's actions, only to find out six years later (after Team X broke up) that after he has settled down with a woman in the remote Canada rockies, someone is hunting down their team. He realises too late it is Sabretooth who kills the woman he loves. He chases after him and gets in a fight with him, which Creed wins.

Stryker then approaches Logan and offers to cover his skeleton in Adamantium (a very powerful metal compound that Stryker had created using a meteor fragment), telling Wolverine he will give him the tools to defeat Sabretooth. The procedure succeeds, but Logan overhears Stryker saying they will erase his memory. With this, he runs from the testing facility, furious he was tricked. But he takes cover in a home of two old farmers. But they are later killed by Agent Zero as Stryker is attempting to kill him.

Wolverine takes down Zero and destroys his helicopter, looking for his old friend John Wraith (also a former Team X member who quit a few months later after Wolverine left), asking where Sabretooth is. Wraith says Fred Dukes (another former Team X member), aka The Blob, may know, and after Wolverine fights him, he finds out that a mutant named Remy LeBeau escaped from an island that Stryker is using to experiment on mutants

During all this, an army general that gave Stryker money to give Wolverine the Adamantium (500 million to be exact) told Stryker he is shutting Stryker down because Wolverine escaped. Then Stryker kills him in anger with a sword. Only Stryker and the army general were in the room then.

After this, Wolverine and John Wraith, who wanted to come with him, finds Sabertooth in Las Vegas and with the metal in his bones he is able to defeat Sabretooth, but fails to save John Wraith, who was just killed by Sabretooth. Sabertooth runs away and Logan eventually gets to the Island with Remy LeBeau, aka Gambit. On the Island he finds out his lover, Kayla Silverfox, is still alive and she was in league with Stryker the whole time. He also finds out she is a mutant and her power is telehypnosis (the power of persuasion). Then he leaves angrily but hears her scream and comes back to fight Sabretooth. He defeats him but instead of killing him, knocks him out. He then finds out that Kayla was forced to trick him - Stryker had her sister hostage at the island. Wolverine then frees all the mutants being held prisoner, including Kayla's sister.

Stryker, meanwhile, activates Weapon XI (another former Team X member who was experimented on), aka Deadpool, who has the powers of healing, laser-blasting and teleportation because of the mutant experiments, and tells it to kill Wolverine. Wolverine then tells Kayla to get the mutants off the island, while he distracts Deadpool. The mutants are fired upon, but Cyclops, one of the rescued mutants, takes care of the people shooting. Then Professor Xavier (a mutant psychic) leads the mutants out using his mind - Kayla stays behind because she is wounded by a bullet. After a brief fight in the warehouse, Wolverine climbs up one of the Reactor Pylons just before Sabretooth recovers and arrives to save him. Then him and Sabretooth fight back to back to defeat Deadpool, which they achieve by cutting his head off. Sabretooth then leaves, and wounded Kayla crawls towards Wolverine. As Wolverine is heading off into the sunset with Kayla, Stryker shoots him with an adamantium bullet in the brain which affects and erases his memory. Silverfox, using her power of telehypnosis, tells Stryker to "walk until your feet bleed...and then keep walking." She dies of the gunshot wound and Wolverine regains consciousness, gets up, then doesn't remember anything, and runs from the Island. Sabretooth is also never seen again in the movie after he helped Wolverine and jumped down from the Reactor Pylon after Weapon XI/Deadpool was defeated.

However, Professor Xavier leads the rescued mutants, using his powers, to his private jet, offering them to join him at his home, and becoming the first mutants at his new mutant school, despite Wolverine, their rescuer, not knowing this.

In the end, after the Credits, Stryker gets arrested for the murder of the army general he committed earlier.

During all this, also after the Credits, Weapon XI/Deadpool heals in the Reactor Pylon and grabs his head...

NOTE: To see a summary and extra information of this movie, go to the Movies and Video Games page.

Stryker (William Stryker), the leader of the team. The only non-mutant in the team.

Sabretooth (Victor Creed), Wolverine's half brother also with healing powers but instead of claws, has sharp nails that can cut through metal.

Deadpool (Wade Wilson), a show-off, dudy-head, talkative mutant with superhuman abilities and an expert with guns and swords.

Agent Zero/Maverick (David North), a show-off Asian mutant with superhuman abilities and an expert with guns.

Wraith (John Wraith), Wolverine's only friend in Team X. He has teleporting powers. Also, like Wolverine, he doesn't kill.

Bolt (Chris Bradley), a mutant who can control anything with electricity, but cannot shoot, absorb, move or convert it.

This is the first X-Men game that uses the movie-that-it-is-based-on's storyline. You can only use Wolverine.

Retrieved from "https://x-men.fandom.com/wiki/X-Men_Origins:_Wolverine?oldid=27395"
Community content is available under CC-BY-SA unless otherwise noted.