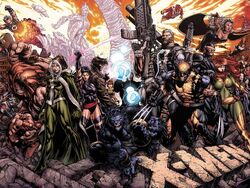 X-Men Wiki is an encyclopedia run by fans, for fans and we need your help!

We chronicle everything surrounding X-Men, which is a comic book franchise that has resonated for decades, starring some of the most popular comic book characters ever. With 1,634 articles, 580 characters, 9,680 total pages and 30,387 all-time edits, we are the go-to place for all things X-Men TV and comics!

The series centers around David Haller, who was diagnosed with schizophrenia at a young age and has since been institutionalized. He discovered a mysterious parasitic mutant, Shadow King, trapped inside him who he eventually removed. What is in store for Season 3?

From heroes to villains, alliances shift greatly among the characters of the X-Men comics.

The X-Men have a 50 year history with Marvel Comics.

Many comics have inspired television series, in live action or animated.

Pryde of the X-Men

Retrieved from "https://x-men.fandom.com/wiki/X-Men_Wiki?oldid=30419"
Community content is available under CC-BY-SA unless otherwise noted.